In exploring one of the deepest flooded caves in the world, a group divers found a new-to science species.

Australian cave divers, during the recent diving expedition found three new species which are a transparent ampiphod, a worm and a small snail. These are all found in one of the deepest underwater caves near Nelson.

“It’s not easy to get inside the caves, and we want to know about the very specific life in them,” says NIWA expert Dr Graham Fenwick.

The discoveries were made in the Pearse Resurgence, a cave in the Mt Arthur Range, close to Nelson, where the divers were exploring underwater cave systems. They were collecting samples of stygofauna, which literally means animals from the River Styx, the mythical river that leads to the underworld.

There are 16 diveable caves in the world deeper than the Pearse Resurgence.
Only ten of these have been dived to depths greater than the current depth explored in the Pearse (194 metres freshwater). The divers were on site for 13 days, performing a total of 74 dives in the 6.5ºC water. The dives took place between 27 December 2010 and12 January 2011.

Worldwide, these aquifer studies are yielding rich troves of biodiversity. The importance of such stygofauna is twofold: they contribute to the health of the aquifer by biofiltration and, in turn, they may represent an important marker of the health of the water.

“It’s important to do an inventory of life in New Zealand, and in this case, it’s a pretty special type of environment, and we don’t have many limestone karst systems that are readily explored,” says Dr Fenwick.

A stygofauna biosurvey was performed in the cave using two techniques. Firstly, any invertebrates observed free swimming in the cave were captured by hand using a tube with a bulb on the end something like a turkey baster, “the stygoslurper as we call it,” says Dr Fenwick.

The second technique involved the deployment of baited fauna traps in the cave at depths from 5 -115 metres below the surface. Small plastic jars baited with a small shrimp were filled with nylon gauze and secured in various places in the cave, in crevices and amongst sediments.

One undescribed (new to science) species of amphipod crustacean dominated the stygofauna collected from the Pearse Resurgence. This species is completely colourless.

“It is six to eight millimetres long, the divers could see it crawling over rocks; it really is a beautiful animal. It belongs to the poorly known genus Paraleptamphopus, one of two genera within the New Zealand endemic Family Paraleptamphopidae,” says Dr Fenwick.

Within the Pearse Resurgence, this amphipod was found most commonly within the main shaft, where the expedition’s divers stalked it on rock faces or caught it in small traps baited with shrimp.

It appears to live on the water-worn rock surfaces from within two metres of the surface of the main shaft’s airbell, to more than 40 metres depth where they were taken amongst gravel and finer sediments.

The two other stygofaunal invertebrates discovered in the system were a minute gastropod snail (about 1.5mm diameter) and an oligochaete worm (about 8mm long). Both were taken from rare deposits of fine sandy sediments within the main shaft at depths of 15-34 metres. “All these new finds are endemic to this area,” says Dr Fenwick.

Several divers have played a major role in the exploration of the Pearse Resurgence since the earliest dives. Keith Dekkers from New Zealand was pivotal in the early days visiting the cave on several occasions and pushing down the start of the main shaft.
In New Zealand, local cavers John Patterson and Deb Cade handled logistics. 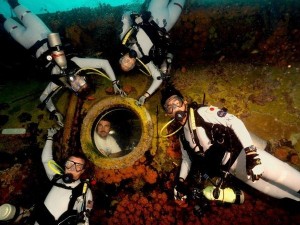 Asteroid Mission Under the Ocean

Peter Bethune… not really an eco ninja? Or a smart bloke….