Asteroid Mission Under the Ocean

From many outer space missions, NASA have decided to do some underwater practice mission. They wanted to discover and learn more what a real space mission to an asteroid will be like. This deep-sea habitat mission is known as NEEMO 6.

As the “16″ suggests, the space agency has been doing NEEMO — NASA Extreme Environment Mission Operations — for more than a decade. The idea is to simulate the logistics associated with an extended space mission, as well as the isolation, by sending an astronaut crew into the Aquarius, 63 feet (19 meters) below the Atlantic Ocean’s surface in the Florida Keys, and have them practice the routines they’d be doing in scuba gear.
Advertise | AdChoices
This summer’s 12-day simulation began on Monday with the four-person crew’s “splashdown” into the sea. The NEEMO 16 crew is headed by NASA astronaut Dottie Metcalf-Lindenburger, who flew into space on the shuttle Discovery in 2010, and also includes Japanese astronaut Kimiya Yui, British astronaut Timothy Peake and Cornell astronomer Steve Squyres (who’s the top scientist on the Mars rover team, the chairman of the NASA Advisory Council, and a veteran of NEEMO 15). Aquarius habitat technicians Justin Brown and James Talacek play support roles underwater.

Last year marked the first time that the NEEMO exercise was designed in line with the space agency’s current plan to send a crew to a near-Earth asteroid by 2025. This year, the four-person crew will bring even more of a sense of realism to the simulation: For instance, they’re communicating with an onshore Mission Control team on a delayed basis, to reflect the light travel times that would be involved with a deep-space mission.
They’re also experimenting with different ways to explore an asteroid-style surface. Because a small asteroid has nearly negligible gravity, astronauts won’t be able to tramp across it as if it were Earth or even the moon. One option would be to use attachment points and handholds to move across the asteroid surface. Another option would be to use mini-spacecraft to hover over and touch down on the surface. Both techniques are being tested during NEEMO 16.

During the latter part of the simulation, Nuytco’s DeepWorker one-person submersibles will be deployed for underwater excursions by the NEEMO aquanauts. “They get flown around the reef with their personal transporters,” Saul Rosser, operations director for the Aquarius Reef Base, told me today.

The crew members also plan to conduct a variety of experiments that play off the fact that the atmospheric pressure inside the Aquarius habitat is equal to the surrounding water pressure at depth — which is about 2.5 times the air pressure at the surface. The experiments will show whether simple tasks such as blowing a bubble or operating a remote-controlled device are tougher at high pressure than they are at normal pressure.

You can also monitor the NEEMO 16 mission via the this Ustream live-video page or this Aquarius webcam page, and watch for updates on Flickr and YouTube. Web-streamed educational activities are planned every day for the next week and beyond, in cooperation with the Challenger Center for Space Science Education. The interactive webcasts will be supplemented by chat capability.

The Aquarius Reef Base is the world’s only undersea research station, situated three and a half miles (5.6 kilometers) off Key Largo on a sandy patch of seafloor sitting next to spectacular coral reefs. It’s owned by the National Oceanic and Atmospheric Administration and operated by the University of North Carolina at Wilmington. NEEMO ranks among the highlights of Aquarius’ research season, but Rosser said there’s more to come.

This year marks the 50th anniversary of Aquarius’ founding, and to mark the occasion, Rosser and his colleagues are planning an underwater extravaganza next month. He was reluctant to provide the details, but a sneak peek that was posted online says the golden-anniversary mission will be led by two pioneers of marine science, Sylvia Earle and Mark Patterson. 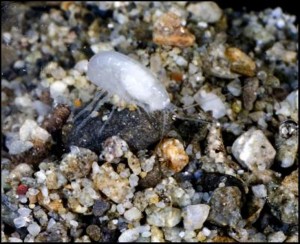 Peter Bethune… not really an eco ninja? Or a smart bloke….